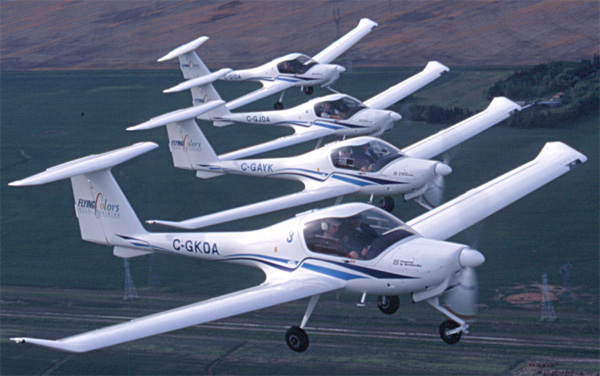 What makes a brand new flight school an industry leader in just a few short years? For Michael Gillespie, president and founder of Winnipeg-based Flying Colors Pilot Training, it is a business plan built on three pillars: technology, partnerships and customer service.

For Gillespie, who grew up around airplanes, it was recognition for a path he almost did not take. Formerly trained in computer science and new products management at the University of Manitoba, Gillespie was more interested in broadcast engineering and the manufacture of specialty electronics. It was not until he watched his brother win the 1991 Canadian Aerobatics Championship that he experienced what he describes as "the brotherhood of aviation". He obtained his private pilots license in 1996. As an entrepreneur, Gillespie began considering full-time aviation activities. The Flying Colors Precision Flight Team was the result. The idea was inspired by the EAA Young Eagles program to introduce youth to aviation.

While developing the business plan, two factors converged. First, the team would require a Transport Canada Operating Certificate; second, he had not been impressed by the flight training offerings in the mid-90s when he had decided to pursue his own licence (in fact, he bought his own aircraft and hired a private instructor). Thus came the foundation for Gillespie's three pillars.

Gillespie's first decision was to employ the latest technology in his new flight school. This led to choosing the new Diamond DA20 Katana aircraft. The panels and avionics are equally part of technology. Three are equipped for VFR flight while one IFR trainer uses 'steam gauges' (i.e., analog); two offer Garmin cockpits and two are EFIS-equipped, unusual in ab initio flight training. In addition to its aircraft fleet, Flying Colors offers the latest in Flight Training Devices, a Vector Systems 'Vision I'. It is certified by Transport Canada as a Level III FTD which means that time in the FTD counts the same as hours in an aircraft. I had to challenge Gillespie on the competitiveness of all this latest technology, compared to older Cessna and Piper trainers used by other schools. He granted that the hourly rate might be slightly higher on the new Katanas, but that the overall program costs for students are competitive, if not more economical. He cited two reasons: Use of the lower cost FTD for up to 30 hours (with more effective learning of procedures) and the instrumentation for IFR training that minimizes cost for most students in the multi-IFR phase. As a further innovation, Gillespie had the FTD installed in a van so it could be taken out to schools and career days. The Flying Colors program also incorporates the latest in computer, Internet and communications technology. Students use personal laptops and the Internet for the distance education degree and diploma programs. Every student receives an e-mail account and all bookings are made on-line. The Flying Colors Web site (www.flying-colors.org) has proven very popular with its aviation weather page being 'hit' an average of every 10 seconds.

Rather than doing it all alone, Flying Colors' success is based on several key partnerships that Gillespie has cultivated from the beginning. Initially using classrooms at nearby Sturgeon Creek Collegiate for ground schools, Gillespie worked closely with the principal for continuing education of the St. James School Division, Brian Head, in developing programs. This partnership culminated in the September 2002 introduction of the first high school vocational program in aviation. While based on commercial pilot ground school requirements, the eight-credit, 880-hour program will provide a good grounding for all aviation careers, whether in airports, maintenance, airline operations or air navigation services. And students who decide to pursue a flying career will have a strong academic basis to work from, including hours in the FTD and the option to pursue pilot training on their own while completing high school. Gillespie commented on the oft-quoted statistic that 80% of those who start pilot training do not complete it, and that 80% of those who do get a licence are no longer active after five years. The greatest value of the high school program may be to select out many of the 80%; the results will be closely watched to see if this new program does in fact improve the success ratio. The Manitoba Aviation Council is also watching this program with keen interest. Assuming the two-year trial proves successful, the plan is to extend the program to other school divisions and flight schools around the province.

Flying Colors enjoys a strong relationship with the Canadian Forces, being located adjacent to the Canadian Air Division Headquarters. Maj Ken Glass of the Aeromedical Training Centre has provided opportunities to use the CF's hyperbaric chamber - how many ab initio students get to experience hypoxia at 30,000 feet? LCol Michel (Mike) Latouche, the new CO of the 435 Herc Squadron in Winnipeg, and a navigator himself, teaches the navigation ground school. Latouche has also taken up piloting and is now a part-time flight instructor. The CF provides reimbursement of continuing education and a number of military personnel are undertaking flight training at Flying Colors.

Flying Colors' professional flight students take their multi-engine and IFR endorsements with Perimeter Aviation, also located at Winnipeg International Airport. "Why reinvent the wheel," says Gillespie, "when one of the best specialist flight trainers in the country is right here?" Perimeter Aviation has been offering advanced flight training since 1960 in its fleet of specially-equipped Beech Travelairs (equipped for known icing) and its FTDs including a Jeppeson FS200 and PFC Elite simulators. Perimeter Airlines is also an employer of Flying Colors graduates.

Utah Valley State College is Flying Colors' primary academic partner. UVSC was the first institution to offer its aviation diploma and degree programs entirely on-line for distance education. Flying Colors, the only Canadian school partner, has also worked with UVSC to provide accreditation for Canadian academic components. Flying Colors recently partnered with Everglades College, a private institution, which will be able to offer a masters program.

Gillespie's focus on customer service goes back to his own experience looking for flight training, where he had been disappointed in the fleets offered and their location, not to mention some attitudes. The first tenet of customer service is to be where the customer wants to be. CYWG provides the central and most convenient location for the most students; it also provides the environment in which students will be operating for much of their careers. Gillespie reports that he has received excellent cooperation from Nav Canada and Transport Canada, and with the resolution of allowing flight training at YWG - contrary to Transport Canada's old policy when it ran the airport, there is good operations support from the Winnipeg Airports Authority.

Flying Colors understands that students are preparing for a career, not just earning a licence. This means providing the extra skills required for working in the industry; Gillespie also works with air carriers to provide internship opportunities.

The most unique aspect of Flying Colors' program is its 'inverted/accelerated' approach. Most college and university flight programs phase flight training throughout the academic program. Flying Colors provides the opportunity to complete the flight licence and ratings in as little as 10 months. The students then continue to complete the academic requirements of their diploma or degree program over a further one to three years (diploma and degree respectively). Putting all the flight training first is 'inverted' com-pared to other programs. The 'accelerated' refers to the students going to work while they complete their academic studies. As another example of practising what they preach, five of Flying Colors' dozen flight instructors are also students in the academic program. The result is that four years after their 'discovery' flight, a 'customer' student not only has all the licences and a degree, but can also have 1,000 to 2,000 flight hours and be well established on a rewarding career path. "A professional flight student may spend up to $50,000 getting all the licences and enough experience to get a job," said Gillespie, "but with our program, they have the opportunity to earn that $50,000 back by the time they would have got the licences and degree in a traditional program."

From growing up with video games, including 'Flight Simulator', today's students are natural instrument flyers. Employers are more demanding, most airlines expect a degree, and this will see more flight training units aligning with educational institutions, even as the number of units declines with industry consolidation into larger schools. Flying Colors' approach to these challenges is to explore new means of delivering programs, such as the high school program, to become even more interactive and participatory. Flying Colors feels strongly about involvement in the community and makes a point of attending aviation events around Manitoba and sponsoring GA workshops.

Financial support for flight training remains a major challenge for many aspiring to an aviation career. If new programs are developed, they may be tied to more stringent qualification requirements, perhaps like military selection processes. Meeting the cost pressures of aircraft, fuel, insurance and a myriad of fees will demand all of the industry's ingenuity.

Nevertheless, the demographics of the population as a whole, and the compulsory retirement age for airline pilots, is going to keep the demand for pilots strong. Growth in the economy and greater demand for personal aviation, the pilots for the new Eclipse jets, will also drive the demand for pilot training.

Young people looking to join the brotherhood (and sisterhood) of aviation will have the opportunity.